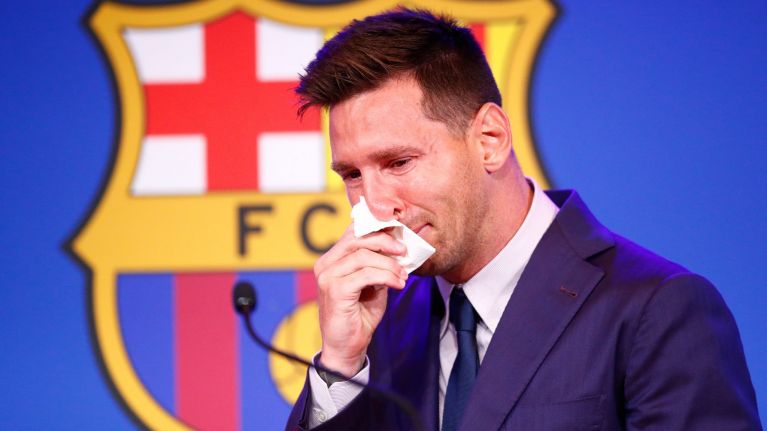 Lionel Messi has said farewell to Barcelona in an emotional press conference, after it emerged that the Catalan giants were unable to sign him on a new contract because of Financial Fair Play rules.

Walking out in front of a room full of teammates and journalists, Messi was in tears before he even began to speak.

He then spoke for a few minutes about the situation, saying that he was struggling to come to terms with the fact that he would be leaving Barcelona and that he had always thought he would say his goodbyes on the pitch.

The Argentinian made it very clear that he had wanted to stay at Barcelona and had been expecting to sign a new deal with the club.

During the news conference he said: “I was convinced to stay here at Barcelona. This is my home, our home. I wanted to stay at Barça and it was the plan… and today I’ve had to say goodbye after my entire life here.

“My family and I were convinced we were going to stay here, at home.

“This is the end with this club and now a new story will begin. Yes, it’s one of the most difficult moments for me.

He added: “There was no problem with Barcelona, really. I was ok with the club on every detail. We had an agreement on everything, I was convinced to stay at Barça… but it was not possible because of Liga rules.”

When he finished speaking he was given a lengthy standing ovation by all those present at the press conference.

The 34-year-old then answered questions from journalists, one of whom asked him where his next destination in football would be.

The six-time Ballon d’Or winner has been heavily linked with PSG, and confirmed that the Paris club was a “possibility” but added that “nothing is confirmed.”

The forward has spent his entire professional career at Barcelona, scoring a club record 474 goals for them over 17 seasons.