Nigerians have continued to kick against the expulsion of a 300-level female student of Accounting caught in a sex act in a now-viral video.

The management of Babcock University on Wednesday confirmed the lady as one of their students, adding that she has been expelled after proper investigation.

In a statement released, Babcock University described the video as a sad commentary on the moral decadence that has assailed the society at large.

The University further explained that she was expelled for violating the rules and regulations of the school, adding that her boyfriend who was also in the video had been expelled in February 2019 for grievous misconduct.

However, Most of the reactions on Twitter on Thursday believe the punishment meted out to the lady was too harsh, with the claims that Nigerian Universities only think about punishment and not reformation or repositioning students to become better after been found wanting.

Reacting to the expulsion, JJ Omojuwa wrote: “Babcock’s reaction to the video was to allegedly expel the student. Our sense of justice is punishment, not reformation. If the school is meant to build character, why do they expel those whose character they find short? Nothing in that video warrants anyone losing 3 years!.

He added, “There are options besides expulsion: 1. Give her a chance to transfer her units elsewhere. 2. Suspend her for a term or session. The same girl will make something of her life someday and the school’s reaction would have been an extra hurdle towards getting there.

“If a school expels your child for having sex in school, sue the school for failing in their promise to develop his or her character.”

Activist, Kayode Ogundamisi wrote: “On what grounds did Babcock University expel the sex video couples if the act did not take place in the university and was during the holiday?”

But imagine if Babcock came out with a press statement saying they will be taking court actions against people who leaked the video and support the lady in question to justice against those who are using it to shame the lady. #babcok

133 people are talking about this

My own take on this #miakhalifa issue. Babcock university have no right to expel this girl, since d incident didn’t take place within d school premises. She have d right to have sex. This kind of unnecessary expulsions in Nigerian private universities should be stopped. #babcok 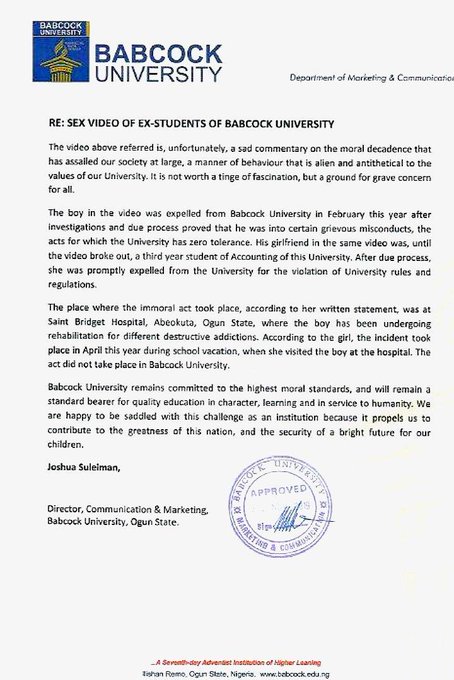 148 people are talking about this

So if the video wasn’t released, she would graduate honorably….and still be a good girl like me & you…okay #babcok

125 people are talking about this

The event took place outside the school during vacation. This outrightly means she was expelled for having sex as a babcock student? And they have the guts to say in their last statement that they are contributing to the greatness of the nation 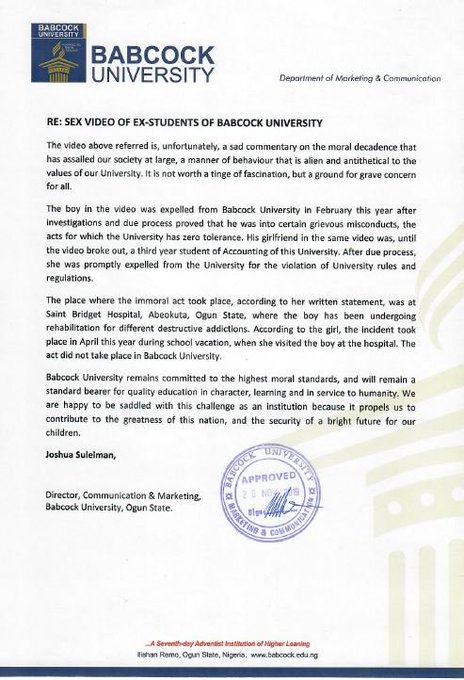 65 people are talking about this
Advertisements